Have you guys ever read up on Orbital Debris? You should, if you’re a bit of a geek like me. Or even just interested in looking at a little bit of the evidence of our shortsightedness as a race. I’m talking about this shit: 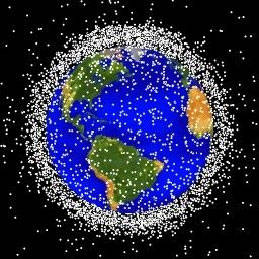 Cool image. Look at all that space junk whizzing round above our heads. I say whizzing…it’s moving at eighteen THOUSAND miles per hour. Like, four or five miles a second.  And we put most of it there. NASA can tell you more about it, with more sciencey words, and in a bit of a less sensationalist manner to boot.

Back to the title then. You’ve probably already thought of what I’m about to say, but that little picture is pretty much how I envision my own thoughts at the minute. There’s a lovely green and blue home there, a real base for everything to start from Solid ground to build from. A little farther out there’s all that space, with so much room to explore, to expand and grow into, so much potential out there. Anything could be done with it.

Then in the middle you’ve got all this crap whizzing around too fast to keep track of. Thousands and thousands of tiny tiny bits of stuff that serves no purpose other than getting in the way. Effort can be made to stop it but there’s always more – even trying to stop it could just add to it. All it does is take up time that could be spent elsewhere, learning, developing.

Though I guess on the other hand, mistakes have been made and yeah, sure, they’re getting in the way. But we’ve learned. And now we’re trying to get past them. Sometime’s we’ve tried and failed. But at least it was tried in the first place.