As I so often do before I leave work for the day, I wrote a small to-do list for this evening. Most of the time they sit there on my desk, forgotten, but this one was about the right length to be actually achievable. Especially given that it was only about ten steps long, and one of those was to make and eat dinner (always gonna happen).

The reason I include those things that are virtually guaranteed to be done is that when something gets crossed off a list, it gives you a little boost. That tiny hit of dopamine combined with the Zeigarnic effect (tldr; incomplete tasks are remembered better than complete ones; completing tasks sequentially means your memory performs better on the next task etc) boosts productivity. At least to me. There’s probably some more neuroscience in there that gives you reasons and figures and stuff, but in essence, to-do list = good. 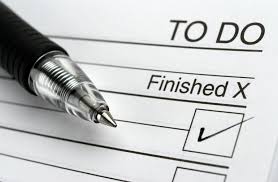 Anyway, I’m probably not gonna make my way through the whole list. Couple of reasons why, first off I managed to smash my phone today. Properly take it out of commission. Which has led to me making time to see what is more financially sensible – upgrading early or paying for a screen fix. Oh, and find a temporary replacement so I’m not fully out of contact. Another was to actually call a friend I haven’t spoken to in a long while, which obviously isn’t gonna happen (sorry Liz) until the replacement actually starts working, which could take a while.

But that’s okay though, because all of those things are things that needed to then be done, hence listworthy, and were done, hence crossed off the list. My productivity is still ticking over, ‘cos I’m still moving towards the end of that list. The stuff I won’t be able to do? Straight on tomorrow’s list, which will then be ticked off, one by one, and the cycle will continue. I’m pretty sure I’ve gushed about how much I fucking love lists before (link was meant to go here but I can’t find it) and it will always be true and not far from the front of my mind.

Sometimes you’ll find you’re in the wrong mood, or mindset, to do something that you’ve been planning all day, or week, or weekend, to do, and that’s okay too! It’ll just carry forward, not forgotten, until the day comes when you’re finally ready to do the thing. Which is the whole point I guess.